We met Dan back in September of 2012. It didn’t start off good due to confusion with similarities on a logo between my networking site and his stunting career. Not knowing who Dan was, we changed the logo and booked Dan for an event at Toyota Park drift competition in June of 2013 . Dan showed off his skills to hundreds of people between breaks of this competition. Shortly after, Dan faded away from the sport like most stunt riders as they get older, get married, and have kids. The Toy Shop was established in 2015 and always poked at Dan to get back into stunt riding. As the shop grew, our ability to do more for Dan grew as well. We tried to get Dan back on a stunt bike for numerous years.

In July, we offered Dan a full sponsorship. July 10th, 2018 we got to work as Dan officially signed a sponsorship and had his entire bike rebuilt by The Toy Shop! Dan’s bike looked like it was blast from the past. We talked about linking up with icon and doing an icon themed vinyl wrap of his choice. He opted for the notorious monkey business theme. After vinyl wrapping the motorcycle we noticed the bike did not match the red frame he still had.We decided to do a full make over. Our goal was to enter the bike in to the Parts Unlimited Dealer Expo, we had 7 days to complete the bike. Some how we successfully completed the bike the night before the show, we took home the “people choice award” for Dan’s custom build stunt bike.

My name is Dan Laird, I started stunt riding motorcycles in 2002 and have been performing professional stunt shows since 2004. I was one of the first guys from the United States to stunt ride a Harley Davidson. My wife Stevie also stunt rides tandem with me and we are the original innovators for tandem stunting.

We perform on two bikes , our main bike is a custom built Kawasaki 636 and our 2nd bike is a Harley Davidson Nightster 1200. I’ve performed in over 500 stunt shows threw my career and have been featured on multiple tv shows and major events including discovery channel, travel channel, news broadcasts, sturgis, and so much more. I’ve  performed stunts for movies and plan on setting some Guinness Book of World Records, tandem on motorcycles. 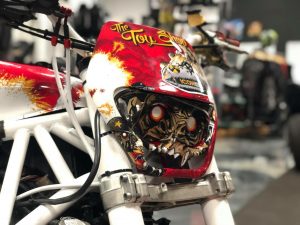 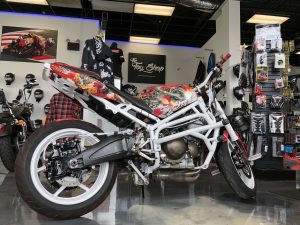 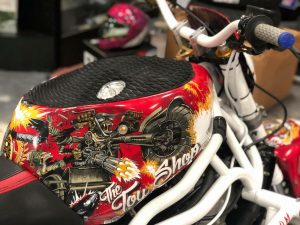 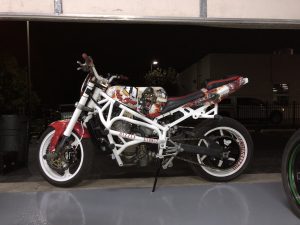 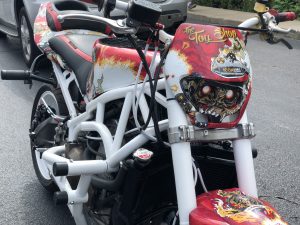 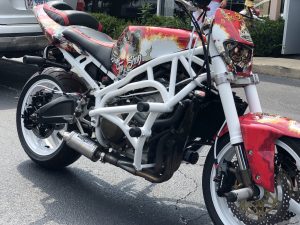